Disclosure: This blog is reader-supported. As an Amazon Associate, I earn from qualifying purchases. When you buy through links on our site, we may earn an affiliate commission at no cost to you. I only recommend products I would use myself and all opinions expressed here are my own.

Bamboo plates for kids are the perfect excuse to ditch the plastic and opt for safer, more eco-friendly alternatives.

Lately, we’ve been spending some time talking to parents about dinnerware, and we’ve seen a surge of interest in bamboo plates for kids.

There is more information available than ever before on the dangers of plastic chemicals in dinnerware for kids.

So, curiosity is undoubtedly explainable.

Bamboo toddler plates are a fantastic alternative due to their safety and sustainability, reducing pollution while preventing health complications.

However, before pulling the trigger, there are some questions regarding bamboo plates for kids that keep coming up.

That is what we’re going to address in this article.

Then, we’ll show you the fan favorites proven to be safe, high-quality, and most popular through our consumer base.

After you finish reading this post, you’ll have all the information you need about bamboo dinnerware. You will discover some of the best options currently available!

Let’s dive into our first question!

Is Bamboo Safer than Plastic?

The most common question we get: Is bamboo safer than plastic? It definitely is!

Bamboo kid’s plates are usually safer than plastic plates unless bought from a low-quality company that cut corners in sourcing materials.

Bamboo plates are safe because they do not require the same harmful chemicals found in manufactured plastic.

Instead, they are crafted from plant-based materials rather than petroleum-based!

BPA is a known hormone-disrupting chemical used to harden plastics and make things such as polycarbonates.

Phthalates make hard plastics like PVC softer and more flexible, providing them with some “give.”

PFAS is a chemical used to provide some non-stick features to plates and cookware. Sometimes disposable plates contain this chemical.

You may recognize the word “Teflon.” This is PFAS.

These chemicals are scientifically proven to leach into foods they come in contact with.

Outside stressors like heat and sunlight can speed up the process.

Health risks from these chemicals include:

These chemicals leach into foods under stressful conditions such as under extreme heat or when exposed to sunlight.

Microwaving food in or on plastic is probably the most common way these chemicals leach.

Another can merely be putting hot food on a plastic plate, especially when old and has a worn-out surface.

While manufacturers and organizations have stated that the small amount of these chemicals we ingest is not dangerous, I believe it’s best to avoid playing with fire.

Choosing non-plastic plates for toddlers is a simple and easy way to avoid being burned!

Are Bamboo Plates Safe for Kids?

I essentially answered this in the last section already, but we still are commonly asked: Are bamboo plates safe for kids?

Plastic plates can cause reproductive harm to ourselves, and especially to our vulnerable youth. Because of that, bamboo is already a safer option than plastic.

Bamboo kid’s dishes do not fall under those same processes and raw petroleum materials that plastic does. Because of this, they are especially beneficial for children!

But are bamboo toddler plates durable?

Plastic plates are durable (most of the time) and for a low cost, but did you know that bamboo is actually three times stronger than timber and has a higher tensile strength than steel?

So next time you’re wondering if bamboo plates for kids can hold up to rough play, remember that fact!

Stainless steel plates are still a more resilient option than bamboo dishes, but bamboo is softer and lighter than steel and will put less of a beating on your floor if dropped.

Glass plates are probably the safest option from a chemical standpoint; however, glass dinnerware is heavy, very fragile, and dangerous if broken.

Bamboo dinnerware provides you the durability you need, the safety you desire, and the ease of being very lightweight and portable.

The increased durability of bamboo toddler plates alone makes them a smarter investment than plastic since they’ll likely last a lot longer and save you hard-earned cash!

Along with the fantastic health benefits of switching to bamboo plates for kids, they indeed are a wise investment in your family.

Whenever the bamboo plates are at the end of their lifespan, you can feel good knowing they won’t contribute to the growing catastrophe of plastic pollution. They’ll biodegrade into the ground!

Now that we know how bamboo is a safer option for kids, let’s address these common usage questions: Are bamboo plates microwave safe/ dishwasher safe?

In general, most of the time, you can microwave bamboo kid’s plates, but manufacturers prefer that you don’t.

This is due to how bamboo dinnerware gets produced.

Because bamboo does not grow into plate shapes, unfortunately, it needs to be ground down into small bamboo fibers.

After that, molded together using a food-safe binding resin.

The resin holds the bamboo plate together to give it its shape.

Microwaving bamboo dishes can weaken this binding and ultimately reduce the lifespan of your dinnerware.

The intense heat produced from the microwave frequency can over-dry the natural fibers themselves and cause cracking.

This goes for bamboo and also natural wood dinnerware.

Because of this, you should heat your food in a glass plate/ container and then serve on your bamboo toddler plate.

I do this with my bamboo dinnerware at home.

All in all, I think this is a small sacrifice, and the pros of bamboo massively outweigh the cons.

Dishwashers are a super convenient appliance that we almost take for granted, but are they the best for every dinnerware piece? Sometimes not.

Bamboo plates should be hand-washed. The heat and long periods of absorbing moisture can cause the dinnerware to swell and possibly warp/ crack.

Because of this, you should wipe clean your bamboo after use, ensuring it’s longevity.

I do not see this as a hassle because we already do this with other items in our kitchen, like cast iron cookware.

However, if you would prefer the dishwasher, it is advised to place your bamboo plates on the top rack.

Now that we have our most frequently asked questions answered, it’s time to show you our top picks of the best bamboo kid’s plates!

As I said earlier, these following options are highly-rated, the most popular, and most frequently purchased, according to our readers and countless others online.

They are from notable companies and are very thoroughly rated and reviewed. You can feel 100% confident moving forward with any of the following options! 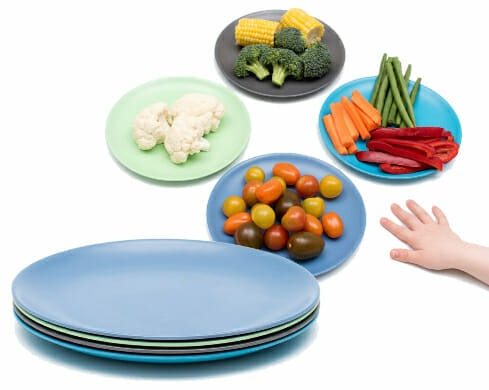 Bobo&Boo crafts their Eco-friendly kids’ plates from all-natural bamboo without the use of BPA, PVC, Phthalates, Lead, Cadmium, or Mercury.

This makes them toxin-free and entirely safe for children!

Because bamboo is very sustainable and biodegradable, you can feel great knowing that you’re supporting a greener planet while supporting a healthier family.

Bobo&Boo’s plates are colored using food-safe mineral pigments and have very stylish, classic colors that are attractive to children and satisfying for adults!

Not only safe and stylish but shatter-proof and very functional for children as they clean up super easily.

Available in two color options: Coastal (pictured above) or Sunset!

You can check out these great Bobo&Boo kid’s plates and grab a set on Amazon by clicking here!

Next up, we have this beautiful four-piece set of bamboo toddler plates from Weesprout!

This set is very similar to the previous offering from Bobo&Boo, chemical-free finish and all, but with the addition of deeper plate edges!

The deeper edges allow the plate to carry foods more securely and help contain messes, perfect for a smoother mealtime!

It will also allow for better stackability when storing.

Along with deeper edges, you’ll enjoy all the excellent non-toxic, chemical-free benefits of bamboo and the durability that you need.

Weesprout stands behind their products’ durability so much so that they even provide you a LIFETIME warranty.

Available in two combos: Green, Gray, Beige, and either Blue or Pink!

Pick up a set of bamboo plates for kids from Weesprout today on Amazon by clicking here!

All this emphasis on small, child-sized plates, but what about bigger eaters and even us adults!?

That is precisely where these bamboo dinner plates come in, also from Bobo&Boo!

These are essentially the same plate as our first option, except they have a 10” diameter instead of 7.8” from side to side.

This wider base allows more food to fit on the plate, perfect for those who have a black hole where their stomach is supposed to be, just like myself as a child.

Not just benefiting hungry kids, but will help you as well. Now you don’t have to be left out of all the bamboo fun!

Grab a set for yourself as well, and the whole family can enjoy a safe and non-toxic mealtime together!

Here we have another great style from Bobo&Boo, this time in a divided design!

Sectioned plates, especially this bamboo divided plate from Bobo&Boo, are the perfect option for any child experiencing a “my food can’t touch” phase.

You get a large spot for the main course and smaller compartments for various sides, dips, etc.!

This bamboo divided plate is the ultimate solution for picky eaters while keeping meals free of toxins!

Get your very own divided bamboo plate from Bobo&Boo, click here!

Although this post is about bamboo plates for kids, we decided to include a couple of bamboo kids bowl options because they are just as popular as the previous examples.

Plates and bowls go hand in hand, and if you’re going to invest in children’s bamboo tableware, it’s not a bad idea to consider bowls as well!

This bowl set, also from Bobo&Boo, comes in the same “Coastal” (pictured above) and “sunset” colors as their plates do.

You’ll have no problem matching for a very safe and stylish dinner table!

Each bamboo snack bowl measures 4.5” wide and 1.9” deep, perfect for little ones!

I really like the handles on the sides that make for easy carrying, reducing the likelihood of accidents.

Along with all of the healthy and sustainable benefits of bamboo, they thought of everything here!

Pick up a set of bamboo kids bowls on Amazon today. Click here!

So that’s a wrap on discussing the topic of bamboo plates for kids!

Hopefully, after reading this post have a better understanding of bamboo kids’ dishes and why choosing non-toxic plates for toddlers is a worthwhile and essential decision.

Small changes like these help shape us into a healthier and more sustainable species, which I believe is crucial. Thanks for stopping by!

P.S. Are you still using

plastic food storage containers? They can be just as troublesome, if not worse, than plastic plates.

Check out our post on the best stainless steel food containers for kids, free of plastic, and other harmful substances. 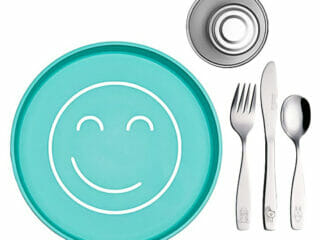 Most Unique Stainless Steel Lunch Box for Kids (in 2021) 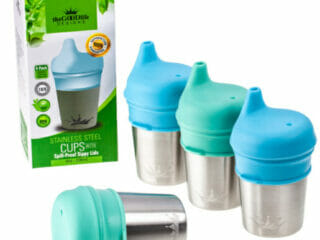 Get my FREE Guide Now!